Beauty doesn’t have to be exotic; it can be common or garden. Like daylilies.

You just have to look around you and acknowledge them when they present themselves to you, like these acting as a herbaceous border. 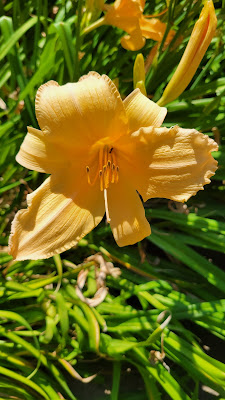 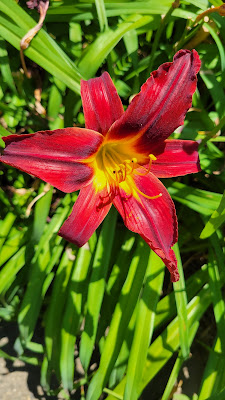 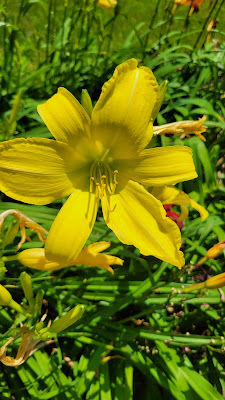 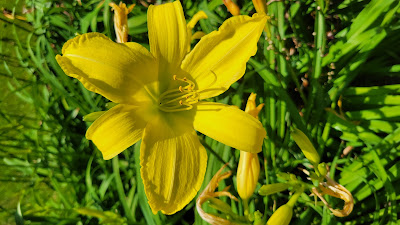 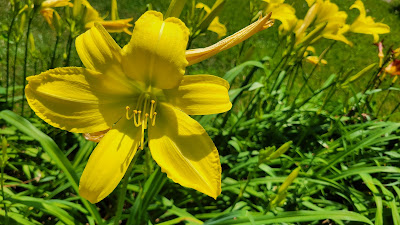 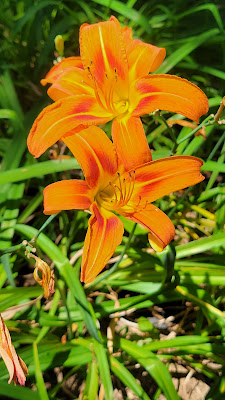 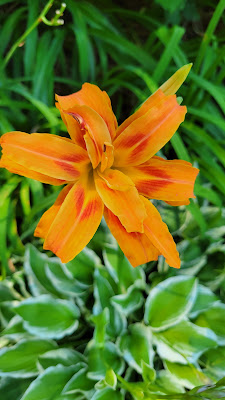 Man—time does fly, doesn’t it?

Came across the Crips of the avian world on the W&OD Trail this weekend.

Barely escaped with my life.

This tree is along the W&OD Trail; I’ve only seen two instances of it. The leaves look like they might be related to laurels, but I’m no tree surgeon. 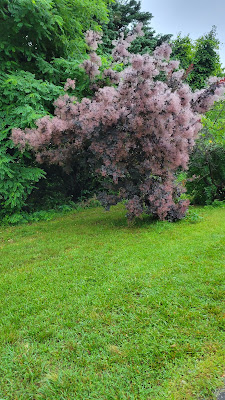 What gets me is the fluffy bits. I don’t know what purpose all that frilliness serves. 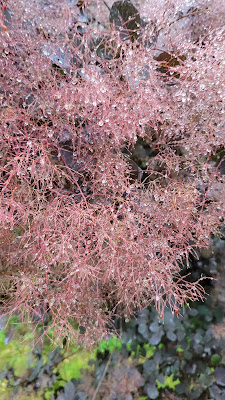 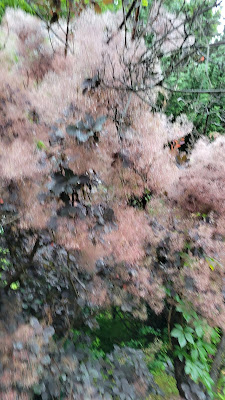 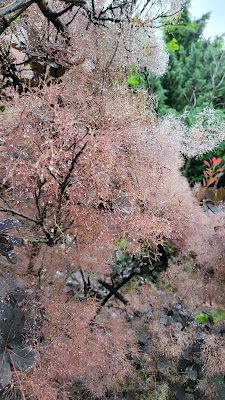 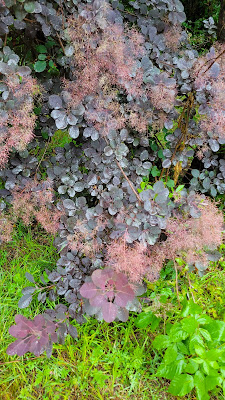 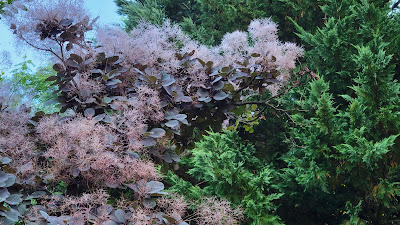 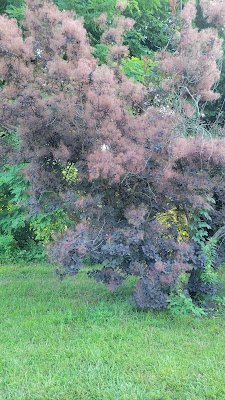 As you might imagine, after the utter shitshow that was last week in the United States, I had some gratitude challenges for today.

Actually, there’s more to it than the Christo-fascist decisions of SCOTUS, so I’m taking my gratitude practice in a slightly different direction.

About a year ago, the product management group I was in was dissolved and its PMs scattered. I ended up in a completely inappropriate “team”—operations—but I was doing what I’d been focusing on, which is collecting, analyzing and reporting customer and user feedback. But a few months back, when I talked about conducting my Voice of the Customer interviews, my manager threw a hissy fit.

“I don’t even have feedback as one of my goals!” she moaned. She tried to persuade me that she might be able to see her way clear to letting me do feedback maybe 20% of the time, but…I gave her a précis of what my work involved, and 20% was not going to cut it.

She was struggling with that, because she had these goals, and at some point she muttered, ”Feedback should belong in PM.”

I replied, “I don’t disagree. How should we pursue that?”

Well, it wasn’t what she’d expected, but she said she’d speak with her manager, the VP of Customer Success. That was in January.

Fast forward to three weeks ago, after I started conducting new rounds of VoC interviews, and VP sets up a call with me out of the blue to basically say that feedback belongs in PM, but that the SVP of PM thinks his PMs should be doing it and therefore doesn’t need another resource.

I agree—feedback belongs in PM, and in an ideal world, his PMs would be doing what I’m doing. But this world is far from ideal, and they have fulltime jobs without layering on my interviews. (I also manage win/loss analysis, beta programs and surveys; plus I Have Ideas.) Which is what I told VP in a conversation that—as is typical with him—ran over the allotted time by 37 minutes. (Among other things, I suggested that he could transfer my slot over to PM; he hesitated and then said no. Well, he totally can; he just wants the slot to hire another CSM or maybe a support rep.) The TL;DR is—if SVP can’t be persuaded that the value of what I do is sufficient for him to allocate a resource, or if I can’t find another position within the overall organization, I’ll be let go.

Well, then—I’m putting together a case for why they need feedback and why I’m the person they need to manage it; I have a strategy for meeting with the VP and the SVP to make that case in words of single syllables. And I’m careening between three emotions: anger, fear and the excitement of opportunity. Longtime readers will know how crap I am at selling myself; I broke that mold when I applied for the job that brought me to cybersecurity,. I concede that in the intervening years, I’ve got a bit complacent and reverted to my old ways of just being in the background. But this most recent experience has reminded me that #playingtowin has to be my goal, even if I end up having to leave this company.

(Toward that end, I have interviews this week with two prospects in the industry.)

TBH, I’m having to rein in the anger and fear, which is a challenge, and I have to say that the uncertainty is wearing me down. When my immediate manager (who presumably knows I have the Sword of Damocles hanging over my head) talks about prospective events six or 12 months down the road, it's all I can do to tell her to STFU. That, however, would not be productive, so I’m working with a couple of colleagues to roll-play my interaction with the VP. (You may have twigged that I rate him only marginally higher than a waste of space. It feels very risky to be transparent with someone who has a vested interest in not supporting my proposals, so I'm kind of at the cliff's edge.) I’m shooting for confidence, not contempt, so I need the practice.

So, while I’m not particularly thankful that I’m having to come up with matrices and PowerPoint presos, or to replace sarcasm in my voice with a smile, I am grateful that I have strengths to play to, sharp arrows in my quiver and good allies at my side.

Looking for a brighter day

In the run-up to overturning Roe v. Wade, SCOTUS dropped three decisions this week tossing out the separation of church and state, changing Miranda "rights" to Miranda "suggestions" and striking down a state (New York) law restricting the issuing of concealed carry permits. This is the apotheosis of Mitch McConnell’s manipulation of Senate rules to refuse to consider a nomination in the last year of Barack Obama’s second term while ramming through three Christo-fascist appointments (including one the month before the 2020 election) under the Kleptocrat.

I want to scream my lungs out.

And I think the appropriate musical piece for today is Gil Scott-Heron’s 1970 “The Revolution Will Not Be Televised”. Even though, in listening to it again, I know that the revolution may not be televised, but there will indeed be videos of the pigs shooting brothers in the streets—and 18-year-old white supremacists raking crowds with automatic fire in the streets, churches, schools, theatres and everywhere else—on social media, as cable and broadcast “news” organizations frantically try to acquire rights to the footage “with credit”. Nixon, Mitchell, Agnew and Abrams have been replaced by Trump, Barr, Pence and Flynn, but the crimes are all the same and there’s infinitely more money swirling around in the background.

Dunno what happened to Xerox and not sure how much Coke it would take these days to make things go better. Well, how much Coca-Cola. Now it would be Kim Kardashian blowing her nose, not Jackie Onassis. No idea who would write the theme song, but Kid Rock would sing it.

And I want to scream my lungs out.

Pull up a chair

On my walk Sunday morning, I came upon this addition to the neighborhood (which was not there on Saturday): 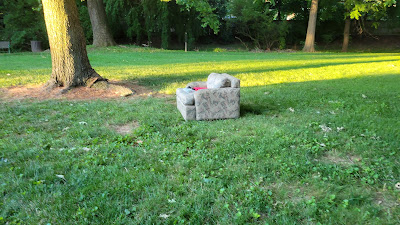 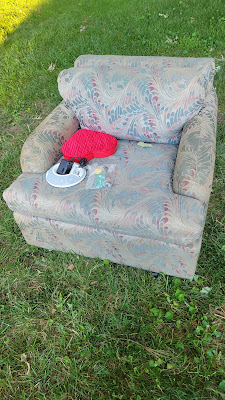 Later in the day, someone had rearranged the heart and plastic bag of little plastic things, but otherwise left it. 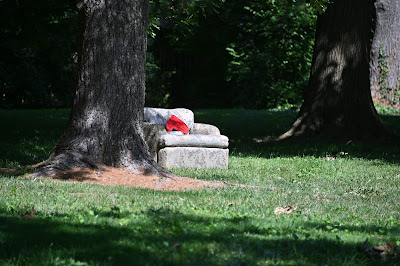 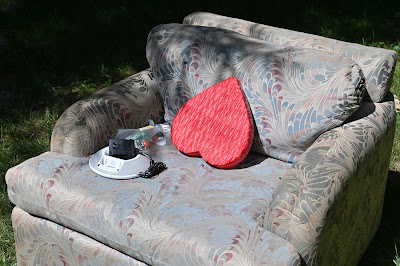 It was gone yesterday afternoon, after we had a bit of a rainstorm. Dunno about the timing of the removal.

I was driving through Great Falls a while ago and saw what passes for development in the horse property district.

(Great Falls is where I think Fairfax County ought to look when they moan about how they need to put more $1M townhouses and 16-story buildings up with $3500/month apartments in the People’s Republic because “we need to accommodate all the low income people moving here.” Slap a few high-rise buildings up along Old Georgetown Pike and let the Republican voters experience a change in density when they trot over to L’Auberge Chez François for din-din.)

Anyway, I can’t recall what used to be here—probably a couple of slightly shabby old places; maybe even some empty acres around a former farm house. I don’t even know that there was an actual street. But I had to pull over to take pix because looky what they got now: 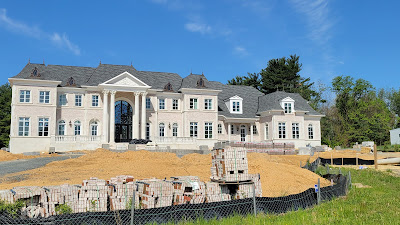 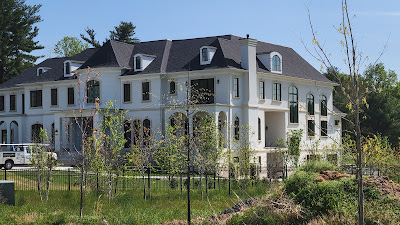 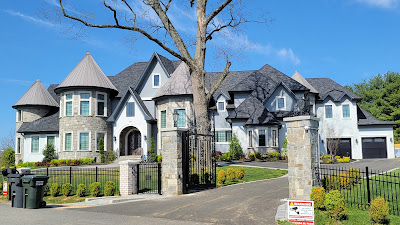 I swear, each of these monstrosities is big enough to be a hotel. Who actually needs that amount of space?

On the road again

It’s been a while since we’ve had any vanity plates, and I keep collecting them. So have a gander. 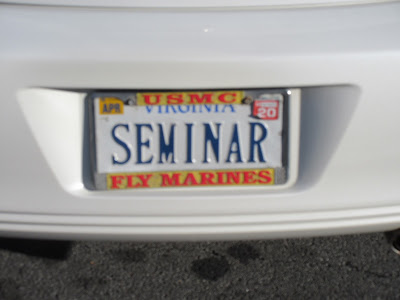 Not sure whether this one's a giver or a taker. 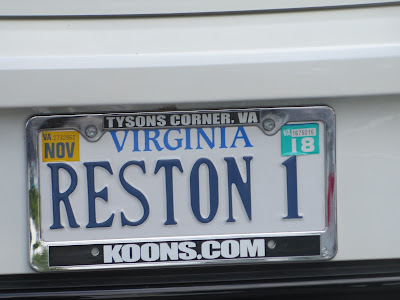 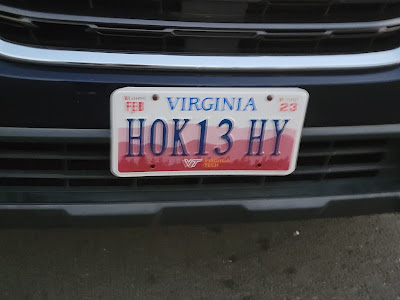 Alumnus of the University of Virginia. 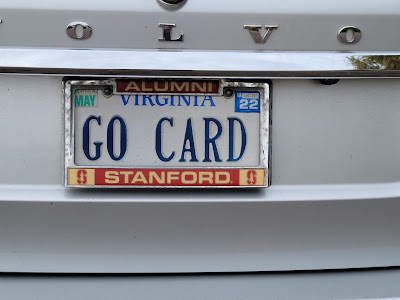 Alum of Stanford (I remember them when their mascot was an Indian, not a cardinal.) 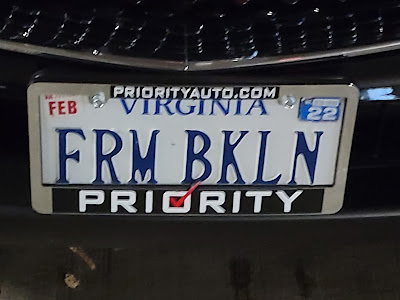 You got a problem wit' dat? 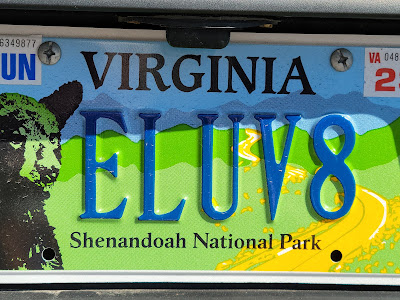 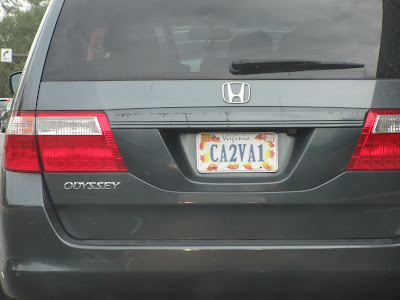 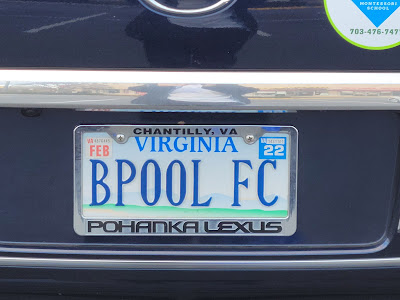 Fan of the Seasiders. 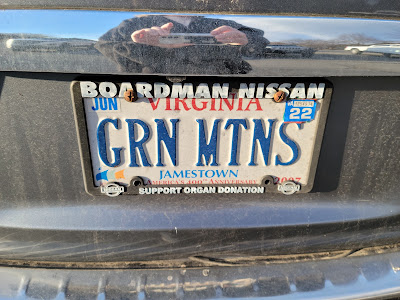 It’s the second half of June here in the District They Call Columbia, and we’ve just had two days of open-your-windows highs in the 70s with no discernible humidity, accompanied by some fresh breezes, and I am joyfully grateful for that.

Right up until Friday, we had a week of switch-to-gills weather, so this is all the more blissful. There is nothing like sitting in your living room with the patio door open, listening to birds singing to clear out the cobwebs in your brain and fill you with gratitude.

I won't live in fear

A couple of weeks ago I was leaving the tavern of the private golf club in the People’s Republic after having dinner with a friend. Four paunchy, aging White guys were at another table and one of them was regaling his mates with his contempt for a holiday called Juneteenth.

“It’s a federal holiday!” he bellowed, being met with disbelief. “About Emancipation!” brought guffaws.

I quickstepped out of there, because I’m not a member and I don’t have time to bring out sock puppets every bloody time ignorant racists plump up their privilege. That would be a more-than-fulltime job. But imagine thinking it silly to celebrate the news that slavery was outlawed (especially since the United States got around to it years after the other White empires, including the Russian one).

We have so many miles to go.

So let’s get moving for Juneteenth (19 June), with Our Native Daughters singing “I Knew I Could Fly”.

The scoop about me (more or less)

Bas Bleu
Writer, New Military historian, humanist in a world of technocrats. I post five days a week on whatever strikes my fancy. Sometimes I bite, but I've had my shots; you're safe. Probably.